It’s been a couple of weeks since I joined one of the free walking tours of the Norwich Cathedral Quarter, that my illustrated map was used to promote.

There was a huge response to the press campaign and the walks were all booked up within a couple of days of being promoted.

Luckily, I managed to book a couple of tickets for the ‘Pubs of the Cathedral Quarter’ walking tour before they ran out. I’m so glad I did, as it was a brilliant couple of hours.

We all met at the Adam and eve pub, where we had a swift half before Jonathan Hooton, our guide and current chairman of the Norwich Society introduced himself and handed out copies of the map.

He talked about the history of the Adam and Eve which is believed to be the oldest public house in the city still serving. The links to Kett’s Rebellion and the death of Lord Sheffield who was killed in the area and supposedly died in (and apparently haunts) the pub. 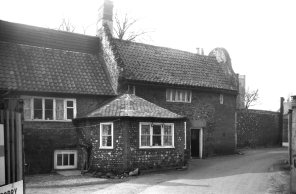 George Plunkett photo of the Adam and Eve

The Adam and Eve

We moved on to the law courts, where there were at one time three pubs on long gone roads. the Worlds End, the original Beehive, and the Cupid & Bow. This area used to house the gas works, so was once a busy part of the city. The Beehive had a huge window attached to the side of it, which, when it was demolished, was relocated to a building on Whitefriers, and can be seen today.

Walking past over white friers, and down Palace st we passed the wig and pen (White Lion), and two other long gone pubs, the Bakers Arms and the White Friers. On Riverside he told us about the New star/Jolly waterman and we made our way onto Fye bridge.

Site of the New Star

Knapped flint side of the Mischief

The site of the Jack of Newbury?

On Fye bridge Street lies the Mischief, Originally a merchants house, built with mullioned windows, knapped flint and a fancy fireplace, which can still be seen today. It was originally named the Wine Vaults, and then in 1763 renamed the ‘Man loaded with Mischief’ after the Hogarth painting of the same name. In the 60s it was renamed the Mischief Tavern

We made our way up Magdalen street, and around to Fishergate, where there are several long gone pubs. Then back onto Fye bridge street where we walked past the Ribs of Beef, Olives, which was once a pub called the Turkey Cock, the Black horse tavern (now the opticians) and Take 5 (the Waggon and Horses / louis Marchesi) – these were all affected by the widening of the road to make room for trams. There used to be a building next to Olives (Turkey Cock) on the corner, but it was demolished to make room for the road. They were all owned by Stuart and Patterson (S&P) who re-fronted them in a mock tudor style.

We finished up at the Maids Head Hotel, where we had a brief history of the building, and some of the clientele and societies associated with it.

It was a brilliant walk, and if they decide to put on some more, we’ll definitely be checking out some of the others – there was something for everyone. The full list can be seen here http://www.cathedral.org.uk/cathedral-quarter-walks. The Medieval churches walk looked really interesting, and they have their own website here, and had produced a brilliant leaflet with info on each church and a map, which can be picked up from the Forum or the Adam and Eve.

There’s also a great book on the history of Norwich pubs, it’s recently been updated, and includes some handy maps and lots of info and photos. I found it in Waterstones in the city, but I think it’ll be in Jarrolds, it’s on Amazon too: Amazon link. The website www.norfolkpubs.co.uk is also a great resource for anyone interested.