It’s coming along, i’m hoping to be finished soon! 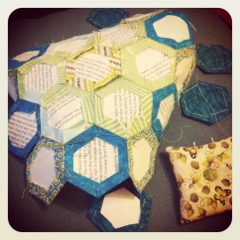 I’m not a fan of the commercial side of these kinds of holidays, and I know my mum would rather I gave her something that I spent time making and considering. I think it’s a lot more personal, and special to receive something handmade.

Mothers day is a great excuse to break out the creativity and show your mum you really care. There’s some great bit and bobs on etsy too for people who have less time to make things, but still want to get something unique and handmade by independent crafters/artists.

I’m a big fan of etsy, and plan to get my shop back up and running soon! 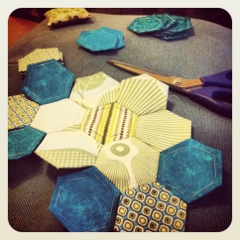 I’ve been meaning for a while to get into screenprinting, as a way of reproducing artwork.

I did an induction at a local print room, and a few months ago, my boyfriend bought me a screen for my birthday.

Finally I have had a little bit of time to play with it!

First I attempted printing through a stencil. I cut my design out of layout paper, and tried printing onto a couple of greetings cards. The result was ok, but after a couple of prints, the stencil started creasing and let ink bleed through.

Next, I had a go at using some screen drawing fluid to paint the design onto the screen. Then using screen filler I blocked out the rest. I think I need some practice though, as the result was fairly disastrous. I then spent well over an hour trying to get the screen filler off the screen…

On the plus side, I then had a little play about with printing through some random bits and bobs, and quite like some of the results.

Here’s a sneaky peak at what I’m up to! 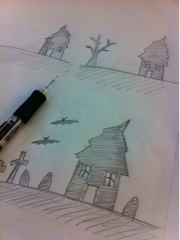 Every year I try to grow some veg of some kind. This year the operation has been a little scaled back. I’ve been a bit too busy to grow lots of stuff, so I just stuck to hassle-free crop of tomatoes (and a couple of chilli plants, and some potatoes)…
The fruits have started ripening now, and I harvested my first little cherry tom the other day. Naturally I was very excited!

I’m always amazed when I look at before and after photos of how much the plants have grown over the course of the year. I’ve not even been growing them for that long this year, and  still they’ve overwhelmed their space!

The Great Yarmouth Society of Artists hold their annual exhibition every September. I usually submit 2 or 3 paintings that i’ve done throughout the year.
This year however, i’m a bit short on work, but i’ve managed to dredge up some old work that I really rather like.
Here’s a sneak preview before I get it framed

To see the rest of my work, and the work of the other artists (they really do put me to shame, they produce some awesome artwork) come along to the annual exhibition at Great Yarmouth Library – 10-17 September 2011.

Recently, due to a bit of a time shortage, I’ve been a little short of any recent personal work to post up here. (Or make it look pretty…)

However, I was fishing through my old photos and found some photos of a mural that I designed and painted with the help of a couple of friends in 2003, just before my art foundation course.

Tesco had recently shut down in the town centre, leaving their premises boarded up and unsightly.

I worked in the pub opposite at the time, and the landlord had gained permission to paint the boards that covered the store windows. We felt that in such a prime location, (open to the market place, next to a car park, and viewable from most of the major bus routes) having such a large area boarded up, especially at the height of summer, with many tourists about, gave a very depressing view of the town.

We were given free reign to do what we wanted with the four boards. So I chose to do a brightly coloured abstract pattern. I didn’t want to do anything too complicated, due to time constraints, (and the cost of paint) and swirls are fairly inoffensive.
To our amazement, throughout the time they were up, there was only one, very tiny piece of graffiti!

Fiona Gowen
Create a free website or blog at WordPress.com.